Spanish Blackjack is a variation of 21 that is popular globally. This variation is played with eight or six Spanish decks.

This variation has its own set of rules. Moreover, this game has a high demand because most players prefer it. The game first gained popularity in 1995 and it has been making strides since.

There are some twists and exciting factors in Spanish blackjack rules. This is similar to some blackjack variants such as Blackjack Surrender. This game is similar to the British variation Pontoon.

Spanish 21 is on a custom table layout which has a lot of similarity to the traditional game of Blackjack. Everything about the game is just as simple and straightforward. If you want to know more about this variation keep reading this guide.

Much like many of the variations of the game, Spanish 21 has the same objective. The game aims to get a total of 21. Moreover, the hand needs to be closer to 21 but not exceed it. This is essentially beating the dealer’s hand.

In this version of the game, all the cards have a value. The Ace counts as the number 1 or number 11. Moreover, they are used as any value depending on the total you are trying to get in the hand. So, cards number two to nine have their face value, while face cards Queen, King and Jack, each have the value of 10. 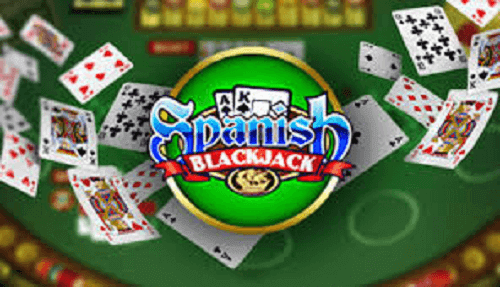 Side Bets and Bonuses

A side bet is known as a Match the Dealer is offered in Spanish 21. In this case, the players cards need to match the dealer’s face up card. This is the point of this bet.

So, for instance, if the dealer has 9 of spades, the player also needs to have a total card amount of 9, 9 of spades or 9 of any kind if they want to win. The payout will vary depending on the number of decks. With a six-deck, you can expect a payout of 4:1 or for an eight-deck it is 3:1. For a rank or a perfect match, the payout is  9:1/12:1. Moreover, you will get two bonuses if you have 9 of diamonds or 9 of spades.

The house edge of Spanish 21 depends on the certain rules of the game. The house edge is usually 0.38% when the game is played with eight decks. Moreover, if the dealer stands on soft 17 the house remains. The house will be reduced to 0.37% immediately if the number of decks is reduced to six.

How to Play Spanish Blackjack

When you play Spanish 21, the suits in the deck do not matter. The only deck that matters is the represented card value. It is considered a soft hand when a hand contains an Ace. And a hard hand happens when there is a duel value of the Ace. When the player holds An Ace and 6 in their hand, it is considered a hard hand. So, here is how the game is played:

You can get various types of bonuses for players who achieve a 21 when playing Spanish 21. The type of bonus you will receive depends on how you get to 21. In both versions of the game, you are allowed to split Aces, double, stand or hit. You will also be permitted to use what is referred to as hard or soft hands.

In Spanish 21, you will have the chance to double down once you see the two initial cards. However, if you are not satisfied with the cards after doubling, you can use a double down rescue. It should be noted though that you will lose your initial bet. You will be allowed to keep your double down bet.

Spanish 21 also has other fantastic options such as splitting up to 4 card options and late surrender. This variation of blackjack is usually played as Dealer Hits on Soft 17. However, in the traditional version, the dealer stands on 17. This depends mostly on the casino rules.

You will find many other interesting options for playing this version. Therefore, you must read up on this game and play free mode if you are interested. Playing the free variation will help you get a better understand of the game rules as well as other important information such as the house edge, odds and payouts.