Razz poker is a well-known Seven Card Stud variation. The objective of the game is for the player with the best five to ace low poker hand wins. Additionally, razz poker rules determine that there is not ‘eight or better’ requirement in order to win the pot.

For players who have a basic understanding of Seven Card Stud, the game will be easy to follow. Similar to the game, the strategy is also easy to understand. Read this guide if you want to know about the casino game.

What is Razz Poker?

Razz poker is a variation of stud that is also known as seven-card razz. The game gained popularity ages ago at the same time as other “lowball” games. The object of the game is to ensure that you have the lowest five-card poker hand possible outside of the seven cards. Moreover, the gameplay is similar to seven-card stud. Below, we list three different rules between razz and stud:

1. Deciding the winning hand at showdown

2. The rules regarding the player who brings in the action during the start of the first betting round.

3. Regarding the player who begins the action on any given street. 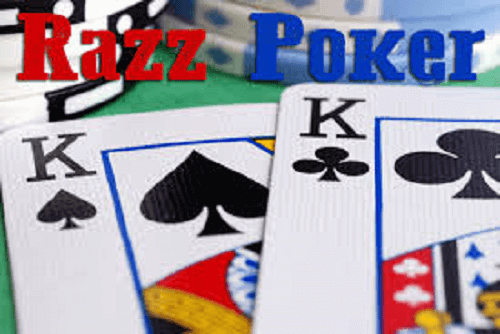 Razz poker is pretty easy and straightforward. The most important things to remember is that Aces are seen as low, flushes don’t count and there is no eight-or-better rule. Stud and razz rules are similar except for how players choose where the action begins for the hand. Another difference is that door cards hold their face value and the player who is left after all the other players fold is a winner.

A player who holds K, Q has a better two-card razz hand because pairs are always viewed as high. In razz, a hand is only as low as the value of its highest card.

How to Play Razz Poker

Many beginner players might be wondering how do you play razz poker? Well, our team of experts are here to help unpack this in a few easy steps. So, before the game even begins, all players need to ante a nominal amount. Once that is completed, then betting can commence. Below we look at a few easy steps:

Although this game is popular amongst poker players, it can be a bit difficult to find the best razz poker strategy. Popularly known as Seven Card Stud Low this game is easy to play and its no wonder many players opt for it at casinos. You need to ensure that you have a great starting hand. It is important that you pay attention to your starting hand selection.

Anther important factor to take into consideration is what the other players are showing. This will give you an indication of what other players are doing. A vital card in razz is the door card. We recommend that you raise if your door card is the lowest showing card. No matter what happens, you should never show your hole cards. Be patient and do not allow yourself become frustrated. In addition, the bring-ins as well as the antes are an important part of the razz strategy.

The players in the hand should enter into the showdown after final betting round has been completed. Every player makes the best five-card hand from their own seven cards. The two cards that remain do not contribute any value to the hand and they are known as dead. You can never use them to evaluate the strength of a hand. In razz, there is no “qualifying” hand needed. The player with the best five-card low hand will win the whole pot.