Omaha poker is a thrilling version of poker derived from Texas Hold’em. This casino game is a great way to destress and try something different from traditional poker. Omaha poker online is easy to follow if you are already familiar with hold’em.

This casino game has distinct nuances and rules. Knowing the poker rankings as well as playing in position is a great tip if you want to maximize your chances of winning Omaha. Our guide will share some insight on the different types of Omaha pro as well as tips on how to play.

There are various types of Omaha poker games that players can enjoy. The minor game nuances flip Omaha from any other ordinary poker game into an exhilarating experience that can keep players on their toes. There are many versions of the game that you can find on the internet. Below, we look at the three most popular types of the game:

Fixed Limit Omaha Poker: When you play this version, you will notice that there is a limit that is specified and applied in each round of betting as well as each game.

Pot Limit Omaha Poker: In this version, a player is able to bet the amount that is already in the pot. This is regarded as one of the highly loved versions of Omaha Poker.

No Limit Omaha Poker: A player is able to wager any sum, to include all of their poker chips. 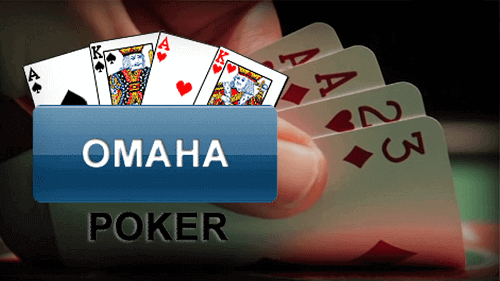 When you play either No Limit Omaha or Pot Limit games, you will see that the games are referred to by the size of their blinds. For instance, a £1 or £2 Omaha game has a big blind of £2 and a small blind of £1.

In Omaha pro, four cards will be dealt to each player. Betting will start with the player ‘under the gun’ and the action will continue clockwise around the table.

In most instance, new Omaha players are more likely to make mistakes when building five-card hands. The players usually forget the rules about the importance of using two of the four-hole cards as well as the three community cards to make a hand.

1. Firstly, Omaha poker online is played with a total of two to eight players.

3. It is the dealer’s responsibility to burn cards.

4. Players are able to raise, fold a hand, or decide to call.

5. It is important to note that the best hand that wins include hands that use three community cards as well as two hole cards.

How to Play Omaha Poker

The variation of poker is played using five community cards as well as four-hole cards. The rules of the game are similar to those of Texas Hold’em. The truth is, if you are already familiar with Hold’em, Omaha will be very easy for you So, here are a few steps on how to play this casino game:

1. The game kicks off with a big blind and small blind, known as a dealer button.

2. The next step is that players will be dealt four-hole cards each which will be face down as well as one community card face up.

3. To create the best five-card hand, players need to use two-holed cards as well as three exposed cards only.

4. There are five playing sections in Omaha. For each of the section there is a playing strategy.

5. The game will commence in a clockwise direction from the button. The first section to start will be the pre-flop. This is where the players can see their hole cards.

6. The first community card will be added to the board in the flop.

7. In turn, the fourth community card is added to the board.

8. The section where the last community card is added on the board is known as the river.

9. The shutdown is the last playing section. In the case where one player is left after the river, the shutdown plays out.

What is the difference between Omaha and Texas Hold’em?

As we have mentioned in the guide above, Omaha is similar to Hold’em. So, if you are already familiar with Hold’em, Omaha will be a walk in the park. Omaha uses community cards and is known as a “flop” game. This is the same as Hold’em. Moreover, just like Hold’em, in Omaha pro, you will be dealt your own hands which will be faced down. The players use the cards alongside five of the community cards in order to create poker hands that have five hands.

There are a number of differences. The major one is that in Omaha players are dealt four hole cards each while in hold’em each player is dealt two hole cards. Players need to select two of their hole cards to accompany three of the five community cards from the four cards. This will help players build their five-card poker hands.