French Roulette is arguably the most loved and perhaps the best variation of roulette. The game has been played since the late 18th Century during the French Revolution. The name roulette means “little wheel” in French.

Originally, French roulette is a game of chance and it’s favoured by thousands of players across the globe. Additionally, this game has massive winning potential. Much like all other variations of roulette, the French version is a wheel-based game that features coloured numbers and a ball.

Our team has compiled this guide to debunk the theories about French roulette. We will offer French roulette tips to help increase your chances of winning at the best online casino. You will find out about the French roulette wheel, table, RTP as well as the difference between the French and European version.

The French Roulette wheel is pretty much the same as the European version.  It is pretty simple and straight forward. The wheel consists of 37 numbers that go from 1 to 36. The colours of the wheel are black and red with the number zero in green. The objective of playing roulette is predicting the number pocket which the roulette ball will settle into.

When playing this game, all players need to make a bet on a specific number. Following this, the dealer will spin the roulette ball in one direction and turn the roulette wheel in another. The respective players get paid, once the ball makes its way to the pocket with that specific number. 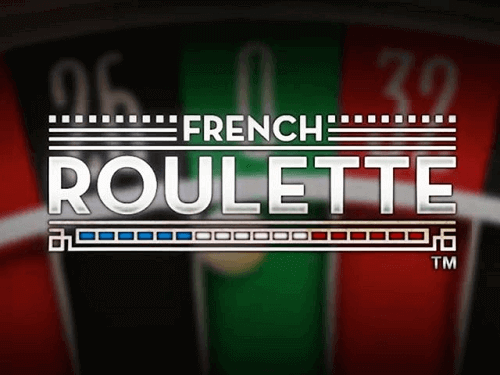 By now we have established that French roulette is a pretty easy and straight-forward game. This is also true for the rules of the game. So, our experts started off with analysing the French roulette rules.  This version of the game has two unique rules namely the la partage rules as well as the en prison.

The la partage gives players the chance to recover their stake. This would be in the unlucky event where a bet was placed on a number elsewhere and the ball lands on the zero pockets. This rule safeguards the stake for another spin around.

With the en prison rule, on the other hand, applies when the ball stops on the zero pocket. Additionally, this would apply when an even number bet has been placed. When this happens, the player will forfeit half of their stake.

The French roulette version has two core groups of bets, outside bets as well as inside bets. Players can use these two bets to make the most of their roulette game. The betting layout also has two sections namely group bets as well as individual number bets. So, lets take a look at the two bets:

Inside Bets: These types of bets are made on adjacent numbers, one single number as well as small groups of numbers.

Outside Bets: They encompass larger groups of numbers.

It should be noted that majority of bets offer different payouts as well as odds of winning from each other. These will, however, be outlined on the board, except the column bet’s payout. Therefore, players should be aware of the French roulette odds and payouts before entering the game.

When you opt to play French roulette, you will realize that the whole table is in French. Although this might seem intimidating at first, it will be quite easy to catch on after a while. However, what remains the same is that you can still bet on black although the table is completely red. Below, we outline a list of terms that you will need to learn if you want to master the game:

Pair: This refers to even numbers

Impair: This refers to odd numbers

Manqué: These are low numbers from one to 18

As we’ve already mentioned, French roulette is a variation of the game that gained popularity over the years following the French Revolution. This table game is entertaining and, in most instances, players are drawn to it because of the great odds it offers. It also stands out because it features a unique layout as well as offers players the lowest house advantage. Below our experts answer some of the most frequently asked questions about French roulette.

What Is the Best Bet in Roulette?

The best bet in roulette is one that offers the en prison option. This bet halves the house bringing it down to 1.35%.

What’s the Safest Bet in Roulette??

It is widely believed that the safest bet in roulette is the black or the red bet. This does not necessarily represent the truth. In all honesty, these bets are also affected by the house edge. Although a bet such as red might mean you will win often, it really isn’t any different from betting on 18 numbers. The difference with betting on 18 numbers is that you can at least represent a specific wheel sector.

How Do You Win Roulette Every Time?

There is no set way to guarantee you a win every time when playing roulette. Do not believe any site that claims that this is possible. There are French roulette strategies, however, that can help maximize your chances of winning big. We have a roulette strategy guide to help you with this. Read it and try them out.

Can You Make A Living from Roulette?

No, the best online casinos do not rig roulette tables. You need to play roulette at licenced and regulated casinos such as the ones we feature on this guide.

Does Anyone Win Roulette?

Yes, there are people who win big when playing roulette. The odds of winning this table game are 37 to 1.