Texas Hold’em Sit ‘n Go strategy also known as “SNGs” or Sit & Go tournaments is a poker tournament. The game is played by between six to nine players. When the game starts, each player will have a similar number of chips.

When playing Sit ‘n Go, players will be kept on their toes as the blinds increase every few minutes. This strategy has numerous great features such as the fact that it can help players build up their bankroll without a lot of time commitment. Sit ‘n Go tournaments (STT) are generally played on a single table.

Apart from the fact that this casino game is one of the most trilling, sit ‘n go is also one of the most profitable types of online poker. You will find numerous variations of the game. In addition, there are many pros associated with playing Sit and Go.

Players can find various types of SNG tournaments found in most US poker rooms. Everything 10 minutes and more, the average sit n goes structure growths blinds. The game also features a Turbo structure which has blinds that increases constantly. Additionally, this means that players have ewer hands to play. 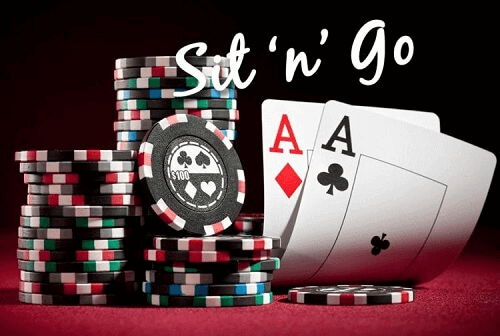 Sit ‘n Go is a great game for both novice and pro players. A great weapon to use when playing this game is knowing how the chip stack can be used as a weapon. Another fundamental part of the Texas Hold’em Sit and Go strategy is knowing how its relative value changes. Below we look at the top Sit ‘n Go strategy to use if you want to maximize your chances of winning:

1. At the Start of the Game, Sit Tight

It is important that during the early stages you play tight. What this basically means is that you stick to good hands. Moreover, this applies when the blinds are small. Another factor to consider is that small pots are not worth the effort. Moreover, when you start betting aggressively later, you will want people to take notice. You need to fold everything else and play big hands strongly.

2. Pay Attention to Hands with Potential

Hands that you need to pay attention to include aces with a suited kicker, small pairs as well as suited connectors. The truth is some hands could potentially surprise you. Alternatively, a tie-breaker card of the same suit can potentially turn into a major hand. Therefore, you need to be ready to play these hands.

Be acquainted to Queens, Kings as well as Aces. These are known as big pairs. It is important that you raise enough to double the amount in the pot when a number of players limp ahead of you. This is known as the big blind.

It is important to remain calm even if you’re short stacked. It is possible that you will come back from the brink. You need to stay calm and wait for something really good to come along. It will happen.

When you are shorthanded or taken down to three or four players, it is vital that you raise pretty much anytime you are able to. After the flop, it is imperative that you raise and re-raise in the right position.

Unlike in larger tournament, in a Sit ‘n Go, it is possible that sometimes you play hands that are available strictly on that tournament. You only have a top pair with a bad kicker if someone raises in Sit and Go. Additionally, it is important to know when you have had enough and leave. This is also known as bankroll management.

8. Don’t Be Afraid to Raise

You have to crank things up again when it’s down to two. Make sure you raise until your rival has nothing left in him/her. If you have big enough stacks, you are all sorted because this is basically all you need. In most cases, your competitor will not have a hand. A big re-raise has the potential to stop your competitor player in their tracks if you’re the one being chased.

It is essential that you play your position in a Texas hold’em sit n go tournament. This is pretty much similar to other cash games. You will get information about your opponent’s position. Moreover, you will be best positioned to make more accurate bets. Another factor is that you will have the chance to make an effective and cheap bluff.

In this version, the blinds increase as the game progresses. Therefore, it would be beneficial to change your strategy and take advantage of the weakness of opponent. If you are short-stacked target players that you are able to steal blinds from. This will be the best opportunity to go all in.

Do not rush to leave the table just because lady luck was on your side and you have won some money. So, what must you do after the money bubble? Well, the answer is simple, continue playing. This is the point where most players are eliminated and given their money. If it happens that you are still at the table after the bubble bursts, make sure you are ready to play for the next rounds. Chances are that play may open again.