Double Attack Blackjack has a lot of similarities to Spanish 21. The first thing you will notice about double attack is that the tens are removed from the deck. There are only 48 cards in each of the six or eight decks. This is because of the missing 10 cards. The rules of double attack blackjack differ slightly from the traditional game. 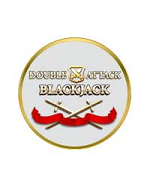 The majority of the rules are user-friendly and players are allowed to double the bet when they see the dealer’s door card. In this guide, we will look at the double attack blackjack odds, the rules and the strategy. Keep reading if you want to know more about this game.

Double attack blackjack rules are very simple especially for players who are already familiar with Spanish 21. Firstly, this game uses 48-card decks and it is a bit more advanced take on the classic version of blackjack. In double attack blackjack, a player is allowed to make a new bet up to twice the initial bet after the dealer disclosures his door card.

Another rule that differs from all the other variation is the Bustit side bet. When the dealer busts on three of the cards, this bet pays out. In addition to this, players are allowed to double down at any time. You can surrender at any given time in the hand, even a double attack. The dealer stands on all 17s and split aces only when you get one card. 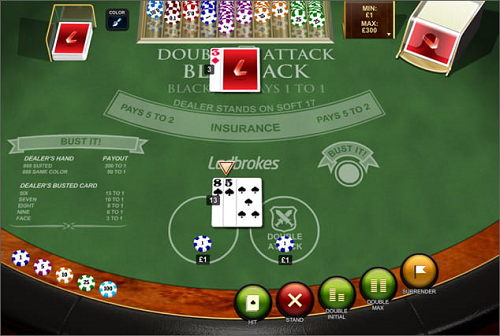 How to Play Double Attack Blackjack

This is the most basic part of the game. Playing double attack blackjack is easy and there is nothing complicated. The first step to kick off the game is to make a wager. You have to place the bet in the main circle of betting in front. If the dealer busts on the three cards the wager usually pays out. Here are other rules you need to keep in mind when you play double attack blackjack:

2. The dealer needs to peek for blackjack.

3. After a split the player may double.

4. Depending on the casino, players are allowed to re-split pairs to three or four hands not re-split aces.

5. The player’s winning blackjack pays out even money.

6. It is allowed for players to surrender at any time even after splitting.

7. There will only be a single card only split ace.

What is a Bust It Side Bet?

A bust it side bet is a bet that wins if a dealer bust with exactly 3 cards. This bet has a house edge of 8.01%. In addition to this, the players are also allowed to place a bust it sides bet as well. Depending on the cards the dealer pays out different amounts. Also known as the BI wager, is also a side bet for Spanish 21. If more than one player makes make a BI bet, then the dealer will take out the third card.

As an experienced blackjack player, you will not struggle with understanding double attack blackjack. Moreover, even as a beginner, you will not find double attack complicated at all. However, with that said, it is important that you abandon your old strategy and rules. For instance, in double attack, the dealer will receive a face up card after the player get theirs once the bet has been made. You will be allowed to double your bet at this point.

Double attack differs slightly from the classic version of the game. However, in both versions of the game, you are allowed to split Aces, double, stand or hit. You will also be permitted to use what is referred to as hard or soft hands.

In double attack, you will have the chance to double down once you see the two initial cards. However, if you are not satisfied with the cards after doubling, you can use a double down rescue. It should be noted though that you will lose your initial bet. You will be allowed to keep your double down bet.

Double attack blackjack also has other fantastic options such as splitting up to 4 card options and late surrender. This variation of blackjack is usually played as Dealer Hits on Soft 17. However, in the traditional version, the dealer stands on 17.

This depends mostly on the casino rules. You will find many other interesting options for playing this version. Therefore, it is important that you read up on this game and play free mode if you are interested. Playing the free variation will help you get a better understand of the game rules as well as other important information such as the house edge, odds and payouts.