The D’Alembert system is one of the most popular systems used globally. This is due to its simplicity especially compared to systems such as the Labouchere. This system operates similar to the Martingale system.

In addition, these bets include Even/Odd, Red/Black, as well as 1-18/19-36. The logic behind this system is that the bets will eventually even out. This means a streak of black will ultimately result in a streak of red.

What is the D’Alembert Strategy?

The D’Alembert system is the brainchild of Jean le Rond d’Alembert, a French mathematician. According to the mathematician, if a coin has earlier landed on Tails it is more likely to land on Heads in the future. This idea was applied to gambling during some point in the late 18th century.

This resulted in players upping their bets after a loss in the hopes that they had a much higher chance of making their money back and more with future bets. Although it was used in other casino games, the D’Alembert strategy swiftly became a widely popular in the game of roulette.  To this day, this strategy remains popular to this day. 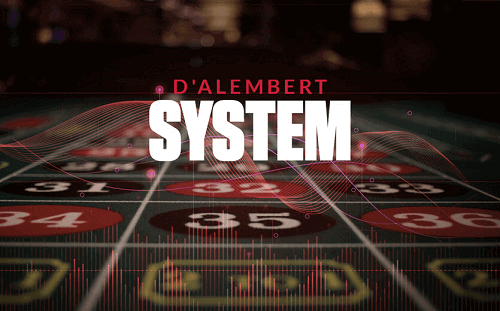 Does the D’Alembert Work?

The truth is, D’Alembert is great for short-term wins. Moreover, you can make a profit even when you lose more bets than you win. In order for this to happen, you need the right sequence of results. However, this is where the system is fundamentally flawed. Although any sequence is possible, when using the D’Alembert system, some sequences can be very costly.

It is important to note that there is a high possibility that you might get a line of numerous losing bets in a row. The truth is, the system does not have any way to guard you from losing several bets in a row. As a matter of fact, you might end up losing a substantial amount if you do. Although you might make a lot of money in the short term, it is highly likely that you will end up losing a lot of money in the long run.

How to Use the D’Alembert System

Much like other systems, the D’Alembert can result in both wins and losses. The trick is to use this system as much as possible and then switch to other systems. This will help you get better results. Below we look at how this roulette betting system works:

Although this is a great system, it is important that players set a budget and make a decision about when they want to walk away and stop betting. Moreover, when you use this betting strategy, the greed can easily get the better of you, however, it’s vital that you set a limit and stick to it.

Advantages and Disadvantages of the D’Alembert Strategy

The D’Alembert strategy is one of the most used strategies. Moreover, it is considered the safest strategies that one can use when playing roulette. The most prominent advantage of this system is that it does not chase losses. In general, this is a great strategy to use, but there are some disadvantages and below we look at those: