Chase the Flush is a thrilling variation of poker developed by AGS. The objective of the game is to have a higher flush compared to the dealer.

The game has a lot of similarities to Ultimate Texas Hold ’em. The flush scoring on the other hand, is similar to High Card Flush. Additionally, it has easy and straight-forward rules.

The reputable software provider, AGS, is also responsible for Premium Hold’em. The company is known for producing exciting casino games. Chase the Flush is played with a standard deck of 52 cards, however, there are no Wild cards or Joker. Much like the classic game of poker, this variation needs two mandatory bets to kick start the game.

Our team of experts have compiled this guide to help you get the basics of playing this game. We will list the top casinos to play the game as well as the rules, strategy and the house edge. If this is the information you are looking for keep reading.

How to Play Chase the Flush

As we have already mentioned, Chase the Flush is based on two variations of poker namely; High Card Flush and Ultimate Texas Hold’Em. Playing the game especially if you are familiar with the two games we have mentioned. Below we share steps on how you can play the game:

Step 1:, players will have to make equal bets on the X-Tra Bonus and the Ante. Moreover, a player can make a side bet known as a Same Suit Bonus.

Step 2: Both the player and the dealer will get three-hole cards each.

Step 3: At this point the player needs to decide if they want to go all in. If so, then they must place another bet which is equal to 3X the ante.

Step 4: Following this, the dealer will place the final two community cards known as the River and the Turn. The cards will face-up on the layout.

Step 5: The player can either fold or bet 1x their Ante on the All-In bet if they have not decided to an All-In bet.

Step 6: At this point, the dealer will announce their seven-card flush and then reveal their three-hole cards. The all Ante bets push if the dealer does not qualify.

To win, the X-Tra Bonus bet and the All-In bet the player needs to beat the dealer. Payouts are made when the next round starts. 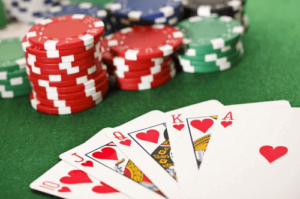 Rules for Playing Chase the Flush

Chase the Flush rules are similar to those of poker. It should be noted, however, that if two rules contradict one another, then you should first adjust the rule that is listed first. Our experts share the rules for playing the game:

1. the game is played with a standard 52-card deck.

2. Once betting begins, players cannot change their bet or place another bet.

3. The dealer has to have a 9 high three-card flush for their hand to qualify.

4. The All-in bet and the Ante push if the dealer doesn’t qualify.

5. In order to win the XTra Bonus and the All-In bet, the player needs to beat the dealer.

6. The Ante bets and the All In become even money when the player’s flush beats the dealers.

7. Alternatively, the XTra Bonus, the Ante, and the All-in bets lose when the player’s hand loses and the dealer qualifies.

8. The Ante, All In and the XTra Bonus bets push when the hands tie.

9. If it happens that the player thumps the dealer with four or over cards of the same suit, the XTra Bonus bet wins.

10. If the player wins and they have less than 4 cards, then the XTra Bonus pushes.

11. Finally, if the player has a four-card flush or more, similar Suit Bonus bet wins.

The truth is that there is no quantifiable strategy that you can use to guarantee you a win when you play Chase the Flush. However, the strategies available will increase the house edge and lower the house edge. This game is mostly based on the decisions you make. Making the wrong decision could result in the house edge increasing. Alternatively, when you make the right decision, the house edge will decrease.

House Edge in Chase the Flush

It is worse compared to betting on the American roulette wheel. It is imperative to note that if you play any casino game where the house has an edge, you are bound to lose your money in the long term. The house edge does not matter, whether it is 50% or 1%.