Atlantic City Blackjack is definitely one of the most loved versions of blackjack. It is named after the great city in the United States. However, it is widely enjoyed all over the world including the United Kingdom. This variation has a lot of similarities to the traditional game of 21 game. 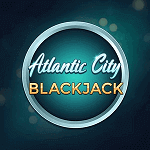 This guide feature all the information you need to know about this version of blackjack rules, strategy, house edge as well as characteristics.

Atlantic City Blackjack follows the basic rules of the popular game. Basically, each deck of cards used in the game has no jokers and 52 cards. It is played using eight decks of cards. Below our team outlines the most prominent differences:

After Splitting, Players can Double Down: Players are allowed to double down once they have split, this is something that is not common with other blackjack variations. Additionally, players can also re-split up to three times in a number of casinos.

Allows Late Surrender: Players are allowed a late surrender. Simply put, you can give up or surrender half your bet after the dealer checks for blackjack and does not have it.

What is Blackjack Atlantic City?

This variation was established a couple of years casinos in Atlantic City. After the law was passed, land-based casino owners switched up their traditional table games and changed the name to what we know today as Atlantic City blackjack.

However, brick-and-mortar rules remain the same throughout the game. If a player wants a different exprerience, they can try Atlantic City New Jersey. This version of Blackjack is an entertaining and fun table game. The objective of the game is to beat the dealer by trying to get to 21 or as close as possible and not exceeding the number.

How to play Atlantic City Blackjack

Essentially, Blackjack insurance is a side bet where the dealer with an Ace facing up has 10 in the hole. This is not necessarily a good bet.  It is about 8% against you if there is a normal card distribution, and at the 2 to 1 payoff. It can only be a good bet if you are able to realize when the remaining deck has less than twice as many non-tens compared to the tens.

The house edge is one of the most important factors to consider when you are choosing the online casino game of your choice. You need to always check if the game has a favourable house edge. This will place players at great advantage.

In this blackjack game, the house edge is usually at around 0.35%. You can use tricks to decrease the house edge. This game has a relatively good house edge. You will need to pay close attention to the rules when playing this game. Between the variations, there will be some slight differences in the rules.

Atlantic City is a version of the popular table game, blackjack. The game quickly gained popularity across UK casinos because of its low house edge.

Players get a great chance of winning. To make the most of your time you need to ensure that you apply the blackjack strategy. Below our experts answer these most asked questions by players.

Yes, the dealer does stand on soft 17. In this case, the dealer will use eight decks. Additionally, although some casinos pay 6:5, most commonly, the dealer pays 3:2 on blackjack.

What Is the Objective in Atlantic City Blackjack?

The overall objective of the game is the same as all the other variations of the game. To win, you will have to get a better hand than the dealer and get as close as possible to 21.

How Much Do Blackjack Dealers Make in Atlantic City?

On average blackjack dealer make 16,81 Euros. This is according to stats from March 2020. But the salary varies depending on the casino.

What are the Table Minimums in Atlantic City Blackjack?

It is important that players understand the minimums of the table when playing the game. Generally, the table minimums vary depending on the casino. They can vary from 13,33 Euro to 22,22 Euro.

Can I Play the Game for Free Before Playing for Real Money?

Yes, the best casinos allow you to play free games before committing to the real money version of the game. There are numerous casinos in the UK where players can access the game for free to up their skill.

How Much Does a Blackjack Payout In This Version of The Game?

Atlantic City blackjack has pretty decent payouts. The game offers 3:2 while the insurance bets pay out 2:1.